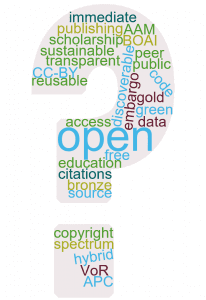 
Open scholarship is a loose umbrella term for the broad and growing interest in providing more openness and transparency to the research process and its outputs. While discussions of open in the early years of the century focused almost exclusively on peer reviewed journal literature, primarily in the sciences, there is now considerable interest in developing more openness across the entire life cycle of scholarship.

This interest has been driven by a belief that more openness and more transparency will increase the benefits of scholarship to all of society. Openness helps build trust, and the ability to more rapidly share the results of scholarship globally may increase cooperation and the speed with which new knowledge can be put to use to find solutions to the most challenging problems facing humanity.

However, discussions concerning the desirability of any approach to open can run aground when the participants in the discussion don’t have a shared understanding of how the terms in the discussion are being defined. Globally, approaches to open may vary considerably, affected by economics, infrastructure, history and politics.

While the word “open” has become ubiquitous in discussions around providing greater access to scholarship, there is no generally accepted definition of the term that is applicable in all cases. In this OSI brief, we touch on the many ways in which terms under the open scholarship umbrella are used, and recommend a framework that may be helpful in assessing and comparing states of open. The brief links to a number of important documents and organizations that define types of open as well as identifying some of the key influencers that can play a role in effectively advancing policies to increase openness and transparency.

Other uses of “open”

All of these areas interconnect as parts of the overall scholarly research structure and process. While each area has unique characteristics, they all share similar opportunities and challenges. Addressing any one of them inevitably results in affecting the others.

The report from the “What Is Open?” workgroup of the 2016 meeting of the Open Scholarship Initiative describes these variations as occurring along a spectrum or as a multitude of dimensions, which can be described using the DART framework (discoverable, accessible, reusable, transparent; see OSI 2016). (Although developed independently, the DART framework is similar to the FAIR guiding principles developed by Force11 to guide data producers and publishers; see Wilkinson 2016). The DART framework recognizes “that openness has a number of dimensions and can be conceptualized as a spectrum, rather than at a single defined point.” It identifies “a baseline set of attributes that constitute what the scholarly community currently views as being the minimum requirements for ‘open.’”

In 2017, OSI’s Standards, Norms and Best Practices workgroup report added sustainability to the framework and emphasized that the DARTS framework can be applied to more scholarly outputs than just peer reviewed articles (see OSI 2017) The DARTS open spectrum uses the term “open” in order to avoid confusion with existing definitions of open access, better understand the full range of open products, and allow for recognizing OA as a specific point or range on a spectrum.

WORK THAT NEEDS TO BE DONE

This brief touches on some of the variations in terms addressing open scholarship. More detailed work needs to be done. For example:

With so many organizations operating in the scholarly communication space, developing alliances is an important tactic for advancing. OSI is interested in sharing expertise and developing collaborative projects to improve our understanding and use of the terminology around open.

ORGANIZATIONS AND EFFORTS FOCUSING ON THIS ISSUE

In the somewhat fragmented environment of people working on improvements to scholarly communication, for any particular facet there are going to be a number of entities working on the issue. It is important to keep track of what these groups are doing in order to identify overlaps and areas of synergy and/or conflict. When discussing definitions of open, several of the prominent players operate with their own specific definitions that may vary more or less from others. These links go to the sections of the organizations’ websites that specifically address their definition of open.

When it comes to actually implementing recommendations or changes, it is essential to identify the organizations that have the authority to determine policy affecting particular facets of the ecosystem.

Discussion of what constitutes open occurred throughout many of the workgroup discussions, but the following reports are particularly key and detail the thinking behind the DARTS framework:

The following OSI briefs provide additional information on this topic.

The literature on open access is voluminous. Much of it is advocacy, either for or against specific avenues for providing more open. For purposes of this OSI brief, we are mostly concerned with attempts to describe or define open. These articles, while not a comprehensive bibliography, are a useful sample for examining how the terms are used:

DEVELOPMENT INFO FOR THIS BRIEF

Scott Plutchak's career in scholarly communication has spanned more than 40 years, from UAB to JMLA to the Scholarly Publishing Roundtable, which submitted a report to the US Congress in January 2010 with recommendations on providing public access to federally funded research results. Scott is a frequent speaker to publisher and library groups on topics ranging from intellectual property to scholarly communication to the future of librarianship.
PrevNext